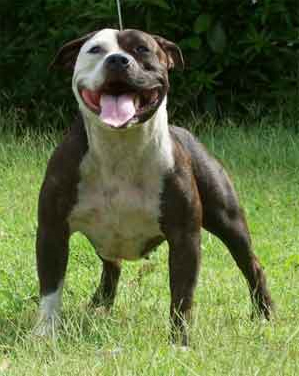 The Staffordshire bulls are known for their great strength because of their sizes. Their variety is muscular and stocky but is also known for their agility. Surprisingly, this breed is one of the two breeds recognized by the UK Kennel Club as very suitable for children.

Furthermore, their types ranked 5th when it comes to dog popularity in the UK, where the breed originated. Interestingly, Staffies are the only breed of dog that are “totally reliable” when it comes to standard of breed.

The following are some of the basic facts breeders would really love to know about Staffies:

Living Environment: either indoors or outdoors

Coat: smooth (or silky like most terriers), dense, and short

Colors: black, brindle, red, blue, fawn; or any of these colors mixed with white

Colors: brindle, blue, black, red, fawn, white; or any of these with white

Temperament: aggressive towards other animals but very friendly with children

Bathe when necessary.
Brush their coat only occasionally using a brush with firm bristles.
Rub down their coat with a chamois or towel to remove hairs that are loose.
Their physique requires a regular exercise routine which includes a daily play time while on a leash.
They should be on leash while walking in public places.

The Staffordshire bull terrier, also known as the Staffies, are known to have existed around the 17th century. Since dog fighting gained a surge of popularity over bull baiting, it became a must to develop a breed of dog that is agile, strong, and has a more punishing head than the Bulldog.

In this light, fighting Bulldogs of that time were crossed with some terrier blood. The hybrid was known as the Pit Dog or the Bull and Terrier. The new cross breed became well known for their tenacity and courage, and despite their reputation of being ferocious with other animals they were excellent companions especially with children.

The Staffie pit dog became a favorite of steelworkers and miners alike. The breed also provided chain makers of the “Black Country” with extra income when worked against ratters or badgers.

The enforcement of the Humane Act in 1835 completely prohibited sports like dog fighting and bull baiting. However, a group of men in the Staffordshire chose to maintain their breed of dogs by introducing them to the show business.

In 1938, a couple of Staffies gained popularity as Champions at the Birmingham National. The popularity of Ch. Lady Eve and were Ch. Gentleman Jim reached many established countries including France, Australia, Germany, Spain, Holland and even the USA. Since then, Staffies became successful as show dogs and were very popular as compared to other terriers.

The Staffordshire Bull Terrier, yes, has become a popular pet while still retaining reputations gained through generations of fighting dogs bred for tenacity, courage, agility, and most importantly, its reliability and great affinity with people especially with children.

And today you can say that the bull is not so bully after all! In fact, the bull is totally reliable as children’s pets.

I hope some of this has helped you learn more about Staffordshire Bull Terriers and if you have any questions please email me and I will do my best to help you, Stephen