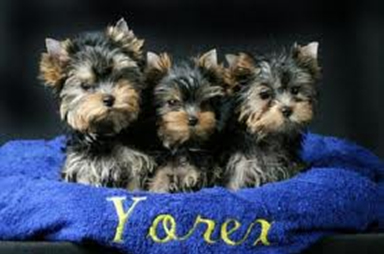 The Yorkshire Terriers, or Yorkies, originated from Scotland but bred in England. They were molded to hunt rats, but nowadays they are popular as pets. In fact, their variety was one of the Top Dog Breeds of 2005.

They usually grow being small and light varieties. Hence, owners do not mind having their pets on their lap almost all day. Moreover, this usual bonding activity usually transforms this lap dog into a bright, playful, and loyal companion pet.

The following are some of the basic facts breeders would really love to know about Yorkies:

Colors: black when young but they attain the colors tan and blue as they mature

Height: between 8 and 9 inches

Weight: between 3 and 7 pounds

Cataract, or loss of transparency of one or both lenses of the eyes

Cryptorchidism, wherein testicles do not descend into the scrotum

Entropion, a disorder with the eyelid; lashes on the eyelid that irritate the eyeballs could lead to other complications

Glaucoma, a condition that causes an increase pressure within the eye
Hydrocephalus

Patellar luxation, a disorder in the kneecap

Portosystemic shunt, or the accumulation of blood toxins in the liver

Urolithiasis, an infection of the urinary tract leading to the formation of bladder stones.

They require daily grooming.
Ears and eyes must be cleaned and checked regularly.
Dental hygiene must be regularly maintained.
They are fit only for short strides.
They should have a regular play time while lying under the sunbeams, chasing shadows, and joining tug-of-war.

In the 19th century, a number of weavers from Scotland migrated to England and brought with them different terriers that were bred to hunt rats. Through time, these terriers were crossed and terriers with “broken hairs” were produced.

In 1870, a “broken-haired Scotch terrier” was named as a Yorkshire terrier by a reporter. He argued that the breed should be called as such because his types were bred in a town called Yorkshire.

Though the Yorkshire Terriers were originally bred as working dogs, they became fashionable pets is England in the latter part of the Victorian era. In 1972, Yorkies were brought to the United States and became the country’s favorite pet.

You can say that the Yorkshire Terriers developed into tough breeds because of their ancestors’ reputation as rat-hunters.

However, their size, and playful and bright character have actually captured the attention and affection of most pet owners. Most proud owners would boast that they have the great giants inside the bodies of these little dogs.

If you want a small but terrible breed of dog, grab a Yorkie now! Just a friendly reminder, they would really need your attention and companionship more than any other terriers.

I hope some of this has helped you learn more about Yorkshire Terriers and if you have any questions please email me and I will do my best to help you, Stephen

PS: Can can you do me a favor and let me know what you think by clicking on one of the Facebook buttons and telling me if the info was good or bad! – Thanks again…